Waste from food industry as source of (bio)pesticidal substances 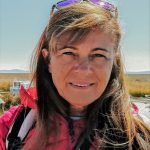 Conventional pesticides used in crop protection may pose long-term threats and risks to living organism and are often perceived as having harmful effects on human health. Therefore, the development of greener and environmentally safe pesticides has been the aim of large research output for several years. To search for natural products based biopesticides, different sources can be used including plants, microorganisms, endophytes or agricultural and food industry wastes.

This talk will and focus mainly on the later, in a circular economy prospective, and on molecular agents, often referred to as Biochemical pesticides: pesticides based on naturally occurring substances that control pests by non-toxic mechanisms, in contrast to those containing synthetic molecules that directly kill the pest. Biochemical pesticides fall into different biologically functional classes, including pheromones and other semiochemicals, plant extracts, and natural insect growth regulators. They are often described as easily biodegradable, with fewer residues, low toxicity to mammalian and non-target organisms. In addition, it is difficult to develop pesticide resistance since they contain a mixture of many substances, the effects of which can be attributed to different activities on pests, included influence on behavioral and physiological processes.

Aspects such as types of biopesticides, pest targets, classes of bioactive substances and mechanisms of action will be discussed.